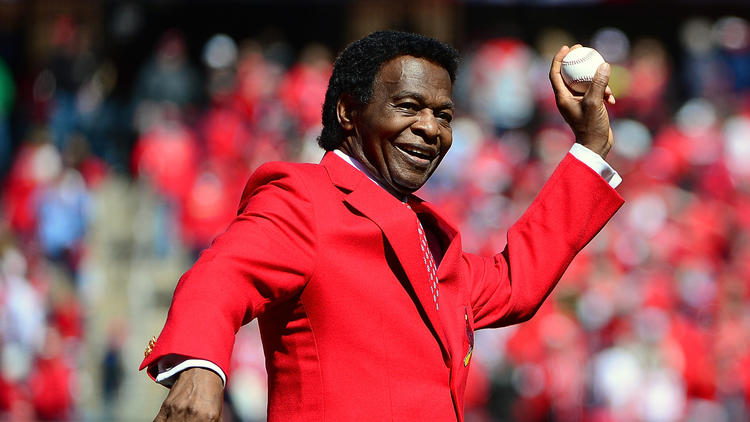 Photo is credited to Jeff Curry of Getty Images.

“If you’re successful in what you do over a period of time, you’ll start approaching records. But that’s not what you’re playing for. You’re playing to challenge and be challenged.”

Those words were spoken by no other than six-time All-Star and 1985 National Baseball Hall of Fame inductee Louis Clark Brock, undeniably a prized figure in baseball’s history and certainly an admirable man in the game of life.

It was how he was acquired that prompted Mr. Brock’s tenure in St. Louis to commence with sourness. It started with the Chicago Cubs’ dire need for quality pitching in the summer of 1964. The Cubs looked to the Cardinals, who possessed one of the National League’s most formidable starting pitchers from recent seasons, right-hander Ernie Broglio.

By packaging up Brock, Jack Spring, and Paul Toth, Chicago was able to finalize a deal with the Cardinals on June 15, 1964, to bring Broglio — an eighteen-game winner in 1963 — along with Bobby Shantz, a 39-year-old hurler that won 24 games one season while in his prime, and scrappy outfielder Doug Clemens to the Windy City.

The main chip heading back to the Cardinals was Brock, who would find playing time in left field in wake of the great Stan Musial’s retirement at the conclusion of the 1963 season. Considering that Brock was hitting around .250 and playing poorly on the defensive side of things, fans, sportswriters, and players alike were quick to say that the Cubs had pulled of an utter steal of a trade to get the starting pitcher they sought after, even though the 28-year-old Broglio had logged over 1,100 innings prior to the deal and was nursing a sore right arm at the time the trade occurred.

“I thought it was a dumb trade,” said Bob Gibson, bluntly. “I didn’t know how good Lou would be. I heard [the trade] and thought, ‘For who? How could you trade Broglio for that?’”

“Brock struck out a lot and didn’t know how to run the bases,” commented Bill White, St. Louis’s first baseman at the time of the trade. “We thought we had given up too much.”

In his first few months with his new team, Brock managed a batting average of .348 in 103 games. Of Brock’s 146 hits with the Cardinals in 1964, 42 went for extra bases, including 21 doubles, nine triples, and twelve homers. By reaching base in nearly 39 percent of his 464 plate appearances, Brock was able to steal 33 bases and help the Cardinals sprint to the NL pennant and reign victorious over the New York Yankees in the World Series.

Broglio was unable to subdue his sore arm, and the ailment forced him to retire after the 1966 season at the age of 31. In his time with the North Siders, Broglio had a 7-19 record and an earned run average of 5.40. Long after Broglio retired, Brock continued to make his case for the Hall of Fame.

Photo is credited to Neil Leifer of Sports Illustrated.

Brock’s quote about successfulness and approaching records was true. After stealing 938 bases across a nineteen-year career worthy of enshrinement in Cooperstown, Brock led all players in major-league history with the most thefts. And if it weren’t for Rickey Henderson stealing over 1,400 bags in his brilliant career, Brock would still be leading that category and likely would continue to for generations to come, given the steady decrease of stolen bases in the sport today.

Brock was inducted into the National Baseball Hall of Fame in 1985, the highest accolade a baseball player can receive. Off of the field, over 30 years removed from playing in his final game, Brock is impacting the lives of those far beyond the ball diamond.

In 2001, Brock was diagnosed with Type 2 diabetes, the most common form of the disease that affects over 29 million Americans. Brock has visited over 40 cities to share his experiences with the disease, persuade people to take good care of themselves in order to prevent it, and give those who have diabetes advice on how to manage it and lead as normal of a life as possible.

In October of 2015, the 76-year-old Brock had his left leg amputated below the knee due to an infection related to diabetes. Fitted with a prosthetic, Brock took the field at Busch Stadium on Opening Day fewer than six months later before a sell-out, baseball-hungry crowd to deliver the first pitch of the year in the Gateway City.

Photo is credited to Chris Lee of the St. Louis Post-Dispatch.

We know Brock is a meaningful figure in the vast history of the Cardinals’ franchise when we see him in his red jacket, along with men such as Gibson, Ozzie Smith, and Whitey Herzog, but we must not forget to pay our respect to Brock for the great strides he is making off the baseball field.

Brock has joined with Cardinals Care to raise awareness in the fight against childhood diabetes. For additional information and to learn how you may donate to Brock’s cause, visit cardinals.com/lou. To show your support of Brock on social media and in your community, use the hashtag ‘#STLisLou’ all season long and purchase a button with the hashtag on it the next time you visit the ballpark or by clicking here.