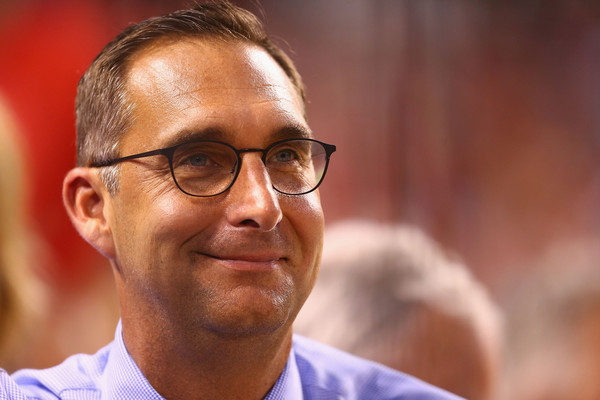 For the third consecutive year, Cardinals general manager John Mozeliak has kindly answered questions of UCB members. The man they call Mo was gracious enough to answer six of my questions, so, for your enjoyment on what will be another boring, baseball-less day, here’s a transcript, featuring my questions (in bold) and John’s answers.

Obviously, your acquisition of Seung Hwan Oh panned out exceptionally well, and it really stood up with the injuries of Trevor Rosenthal, Kevin Siegrist, and Seth Maness. With that in mind, are the Cardinals keeping an open mind as far as signing out of the KBO and Japanese League goes?

Yes, we’ve committed a lot of resources to the Asian leagues and are keeping tabs on it moving forward and when you do have success of someone like a Mr. Oh, that give you confidence. We’ve continued to look at and invest there.

Yadier Molina had his first injury-free season in 2016 since 2012 and did so when many expected him to decline, given the multiple DL stints and surgeries since 2013. As Molina’s career (as an everyday backstop, anyway) presumably draws to a close over the next few years, is there a possibility that Carson Kelly will serve as the Cardinals’ backup catcher in 2017 to learn and work with the man whose role he’ll eventually inherit?

Clearly the success Carson has had in the short term is something we are excited about. How do we balance that and Yadi’s playing time with Carson’s? I don’t want to put Carson in a place where he can’t develop. The question is ‘what can we map out for him?’ Do you allow him to play every day at Memphis and then join the team? We don’t have the answer yet, but it’s something we are thinking about.

Darren Seferina, Eliezer Alvarez, and Magneuris Sierra are among the handful of speedsters in the farm system of a Major League team that collectively failed to commit 40 thefts this past season. Though they’re occurring at the Minor League level, how do their high stolen base rates change your outlook on the Cardinals from a base-running perspective moving forward?

I do think there’s a correlation between base running and athleticism and it’s something we are focused on both domestically and internationally. We are looking at ways to interject athleticism in our farm system. You mentioned three people in Seferina, Alvarez and Sierra that all have above average speed and we want their base running skills to grow. We did have Willie McGee focus on that with them this past year, but also look at ways we can maximize that as well moving forward. This sort of dovetails into what we are talking about at the Major League level.  We feel good about where these athletes are moving.

After acquiring Jedd Gyorko to be a utility infielder with a little power here and there, how impressed were you with his team-leading 30 long balls in 2016 and how does his breakout year at the plate sculpt what may be in store for him playing time wise as we enter 2017?

When we made the trade for Gyorko, we were excited about his offensive upside and aware that he was a versatile player. It’s a challenge for Mike to not put him in the Cardinals lineup. Jedd has multiple gloves that he can bring to camp, which is very helpful for next season.

With the recurring injury in his shoulder prohibiting him from a full year of starting regularly, do you envision Michael Wacha working primarily as a reliever next season?

It’s an interesting question in regards to an age old debate, what’s more stressful – starting or being a reliever? One thing most people fail to realize is how many times you get up in the bullpen, how many times in a game are you warming up, are you going (pitching) on back-to-back days? So that’s a fine line – usage in the bullpen. When I think about Wacha, I still think he has a chance to be a middle to top of the rotation starter. Health is going to drive that.

I took up scorekeeping this season, and, I must say, it was pretty enjoyable, as I ended up scoring over 60 Cardinals games and close to 100 total. So, I have to ask: Do you keep score of games? If so, do you have a specific brand of scorecard/scorebook you use and how meticulous are you when it comes to tracking the smaller aspects of games, such as pitch type, defensive alignment, and challenged plays?

My scorecard is created and provided by our Communications department. I tend to keep score, but not on a consistent basis. When I do, it lacks detail you may find in a robust version. Throughout the days and games, my computer is on and I may occasionally catch up with other activities.

Big thanks to Mr. Mozeliak for taking time to answer my questions and those of others!