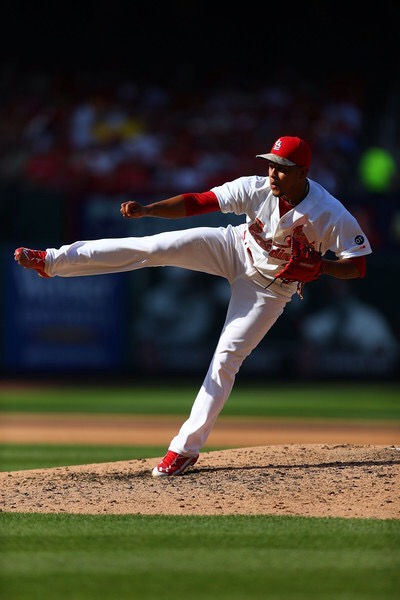 Viva El Gallo. The man with the bewildering slider. The same man who has the ability to light up a radar gun to the tune of a 97 MPH fastball. One may say his right arm is full of life, such as a tsunami. If you’re still unsure as to who I am referring to, I strongly suggest you learn. He will be around for a while. His name? Carlos. Carlos Martinez, jersey number eighteen for the Cardinals. The 23-year-old righty who has been rushing through the “growing pains” that all young pitchers in the Major Leagues must go through to reach their best performance. We, fans of the Cardinals, are in for a wave of excitement.

Following the 2014-2015 offseason that vacated a spot in the Cardinals’ rotation, they looked upon Carlos to occupy the opening. Formally used out of the bullpen and for the occasional start, Martinez had to make the leap from serving as a set-up man to taking the mound every fifth day. He started off the season on a high note.

During the inaugural month of 2015 regular season, his first four starts, he allowed just five runs over twenty-five innings. He walked nine batters and racked up twenty-three strikeouts along the way. He really blew my early season expectations out of the water. There have been some rough waters in this transition, of course, but they may be drowned out by the dominance he has displayed in a few of his starts, particularly his most recent two. The previous two starts have been full of maturity and commanding will, something that wasn’t as visible in his first couple of starts this month..

In those two *disappointing* starts, he went a total distance of nine innings. He surrendered fourteen runs in that short time. Did he allow home runs? Yes, two of them. Did his defense let him down? No, the seemingly always dependable Cardinal defensive play was that. Many, six to be exact, of the fourteen runs he allowed were scored by runners who reached base via the walk. He issued eight passes in the span of nine innings, only one being intentional. If you haven’t figured yet, six of eight, 75%, of the batters who he walked came around to score later on. It doesn’t take much intelligence of the game of baseball to realize that walks are comparable to gifts, and those gifts give the opposing team a chance to make some offensive magic. This is what I considered to be a major part of the growing pains that were mentioned.

While some looked at those starts as a time to panic and stress, I used them as a time to fantasize. I often allowed my mind to wander and think about all of the experience he was gaining. He learned some of those little things, such as that “stuff” he could only teach himself. He singlehandedly taught himself the way he could use his potential and perfected knowledge to turn into a beast in the future. A tsunami.

His two recent starts featured a Carlos Martinez who appeared to be more seasoned, more aware of the role he played in the game. The starts, together, equalled 13 1/3 innings. During those innings, he struck out thirteen batters. Oh, and guess what? He allowed zero runs. Zilch. Nada. Goose eggs. Carlos shut down the offenses of the Mets and the Diamondbacks. Amidst in the quality of his starts was his slimmed walk count. Only four batters reached base on balls. That’s stunning when compared to how high his walk count has been in the past. Just by his body language on the mound and the pitches being delivered right to the catcher’s target, it was easy to see Carlos was on a roll.

So, should we expect starts of this  manner consistently? No, at this point in time, we really shouldn’t.  But the time when we may be able to might be closer than we think. Look, I’ve followed this man’s path like a hawk over the past year or so. I feel like I understand him. He wears his emotions on his sleeve. During some games, it appears to me as if he lives and dies by every pitch he throws. It’s clear to me, and I’m sure all of the other Martinez believers out there, that this man is the real deal. He, Carlos Ernesto Martinez, has got the potential to be something great. Something amazing. He has been using that potential, he is silently becoming great. The upcoming road for him has yet to be written, but, in the upcoming months of this season and beyond, I vividly believe he will be great. We will be given the privilege to witness elite power every week, the power like that of Tsunami.

Thank you for reading!